The nightjars in the clear fells within the conifer forest are slowly being located. Late on a damp, cool night, heavy with cloud, suffocated by the humid air and an irritation of midges, we immediately find one of the four radio-tagged males. Tony knows he is likely to be sheltering the first brood, with the female somewhere close by incubating the second clutch; sure enough we follow the beeps and find him and two well feathered young not far from the forest road. The male lifts silently, Tony rings the young birds and we leave them as we find them, sitting side by side on the damp moss.

The following evening and North Wales is dry and warm. We try to catch the female at the nest with the two young; she comes in to feed them after dusk but she is canny and avoids our best laid mist net. We take the net down and hunt three other radio-tagged males but never get a single beep from the receiver as we drive the forest roads. Not a churr from a nightjar either; things grind to a halt in the silence of the small hours. These birds are more often than not fiendishly hard to work. 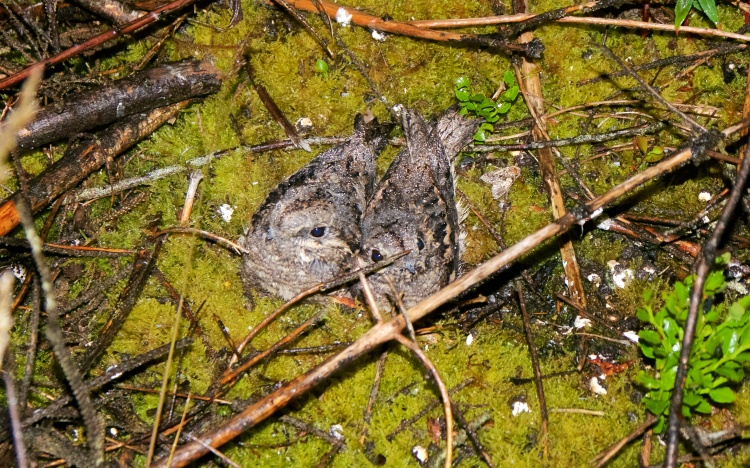 Two immature nightjars that will soon be flying.

The male brooding the two young; note the white patches on the wing tip which the female does not have.

Dawn strikes at 4am with pastel oranges over the dark conifers and rolling hills. At 6am, with damp clouds again in control, we are on a wooded hillside above a winding estuary where we meet the ‘Friends of the Ospreys’ team. In a well practiced drill employing ladders and ropes, they climb to one of their nest platforms at the top of a huge Spruce tree tenanted by a breeding pair with three healthy young. These are lowered to the ground and Tony shows them how to put on the BTO ring and colour-ring; when fully trained they will do this work themselves.

This has been patient work across North Wales by the Friends for 10 years after the first recorded breeding pair in Wales appeared on the Glaslyn Estuary near Porthmadog. Osprey assistance involves talking to landowners and obtaining permissions, putting up the huge nest platforms with ‘starter nests’ in locations close to rivers and estuaries, refreshing the nests each year before the birds arrive and then waiting and watching. The number of pairs in Wales is increasing slowly with, I think, four pairs rearing young this year but there are many other nests with pairs or single birds in attendance. 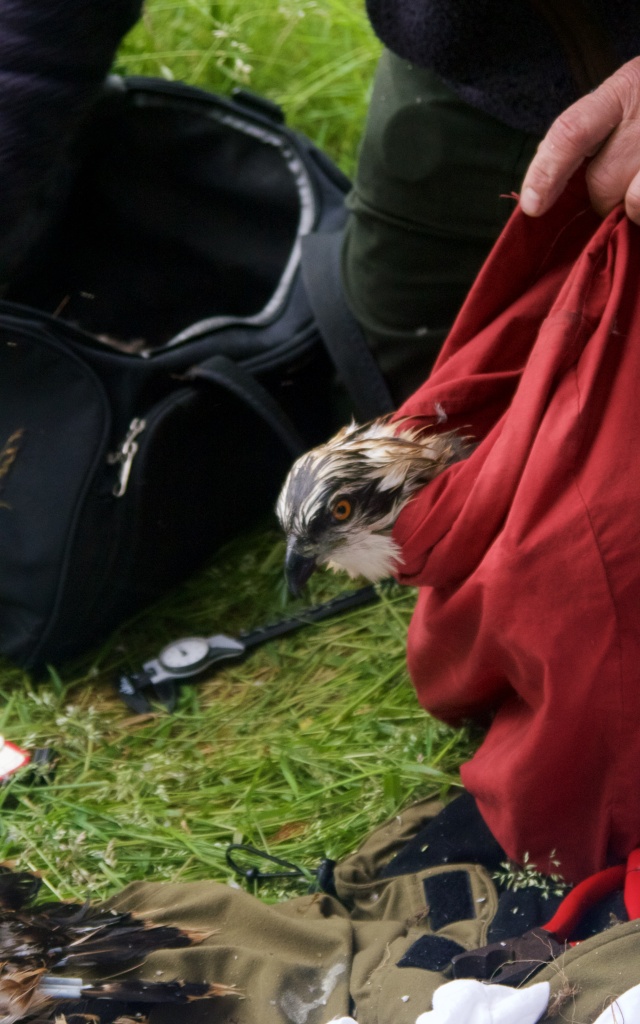 Young male osprey being weighed; like most raptors the males are appreciably smaller than the females but this one still weighs in at over 1.5kg. One of the females is nearly 2kg, the heaviest recorded in Wales to date.

We travel on to Dolgellau and spend the day trapping hawfinches deep in an old wood of oak, birch, beech and hornbeam. The trapping area is baited with sunflower seed and finches, nuthatches, tits and robins fall from the trees. Most grab a seed and dash for cover perhaps to stash the loot; the finches squat and feed, patiently milling the seeds such that the dry husk comes away and they then eat the soft kernels. The mesh net that springs over these obliging birds is released by a hefty tug on a cord that snakes from the nearby hide.  The net harmlessly pins them to the seed-strewn floor. The aim is to catch unringed birds by constant checking of legs through binoculars, and not to be side-tracked by photography or worse, to get too comfy and nod off.

The decision as to when to pull the cord and release the net is exceedingly tricky; do you pull immediately one or two hawfinches are down or do you wait for more? Flocks of young and occasional adults come and then suddenly go. One adult feeds a begging, fluttering young of similar size; the whole procedure looking comical. Twice we have around six birds in the capture zone and we wait for more but both times they all are off in a flash of white wing and tail; it takes 20-30 minutes for birds to return. So we reckon there is no chance of a big catch in double figures; four or five is the best we can do. In three hours or so, Tony has just two tugs on the release line and catches nine birds; eight are unringed of which seven are recently fledged juveniles.  A good result. 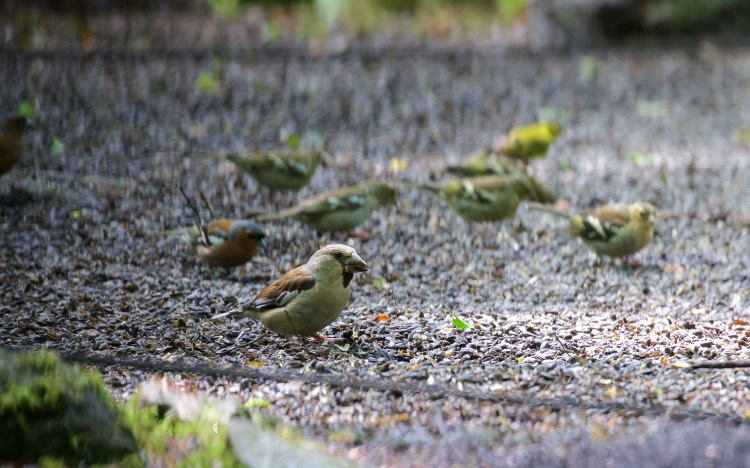 Hawfinch, chaffinches and siskin milling the sunflower seed on the baited trapping area. 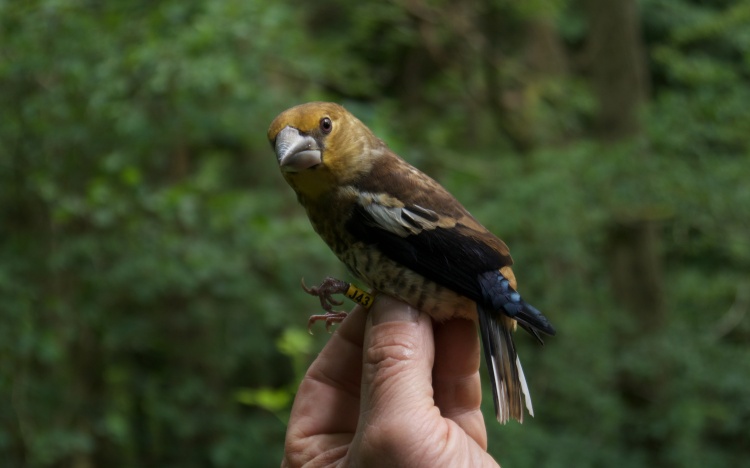 The wonderful plumage of a juvenile hawfinch.

There are bird tables and feeders in gardens in Dolgellau that are visited by colour-ringed hawfinches each winter; observations of individually marked birds from back windows now run into the hundreds and provide important survival and movements data for what is a large and important population. This for a species that is now rare in the UK and extremely difficult to study. The breeding hawfinches were discovered only a few years ago through some remarkable fieldwork by a local ecologist.  The birds have distinctive calls but are virtually impossible to see high in the canopy or deep in a low bush where they construct a flimsy stick nest. 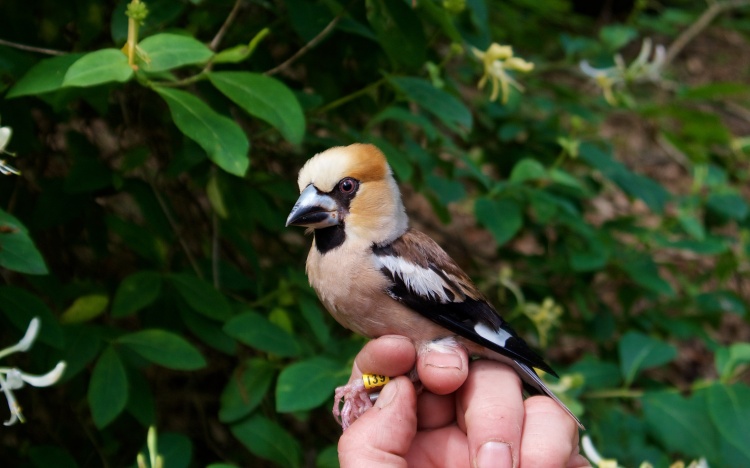 An adult hawfinch with attitude; the huge silver bill is designed to crack seeds and stones, oh and sometimes fingers. 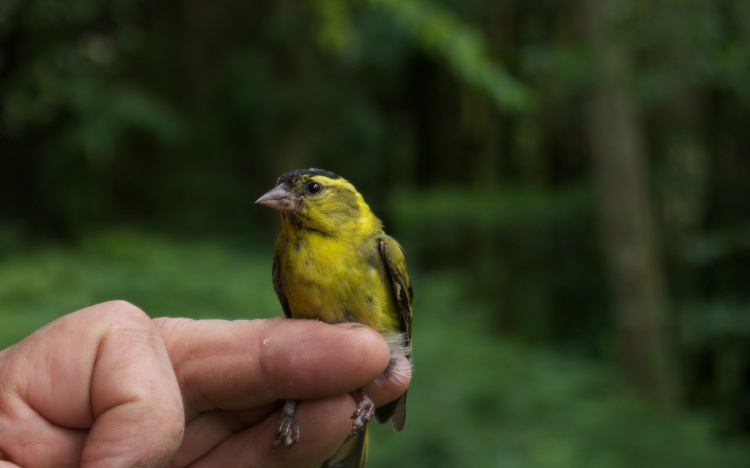 A male siskin showing off its much smaller bill.

On the way back north from Dolgellau, we check a small sand martin colony on a mountain road through ‘the ranges’ between Dolgellau and Bala.  The area is a virtual nature reserve because people are excluded due to unexploded ordnance from a long abandoned, army firing range. The area is a haven for black grouse, kestrels, other raptors as well as many ffridd species such as whinchat and grasshopper warbler that prefer the shrubby, grass and bramble heavy ground. 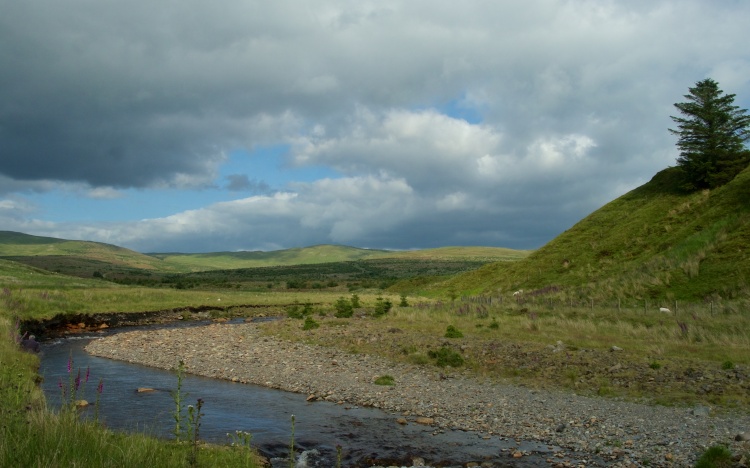 The upland landscape near Dolgellau; a small sand martin colony is on the left bank with the shrub-covered ‘ranges’ in the distance 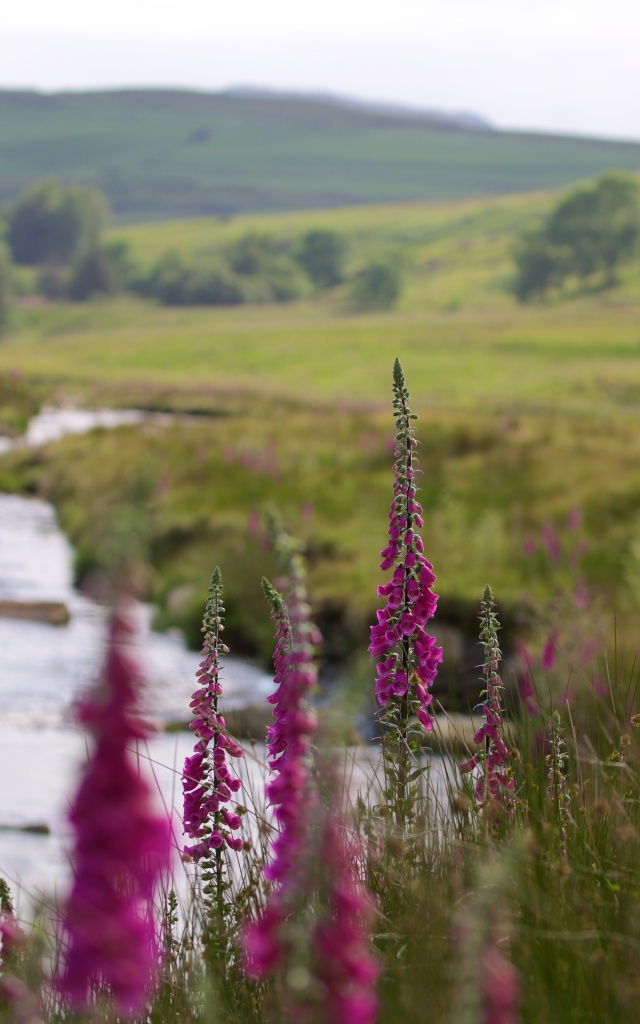 Foxgloves are abundant this year.

After our second night of jarring, we headed to the hayfields of south Shropshire to check on the curlews.  The hayfields now shine bright after their recent cut but some are already a dun brown after mature spreading. 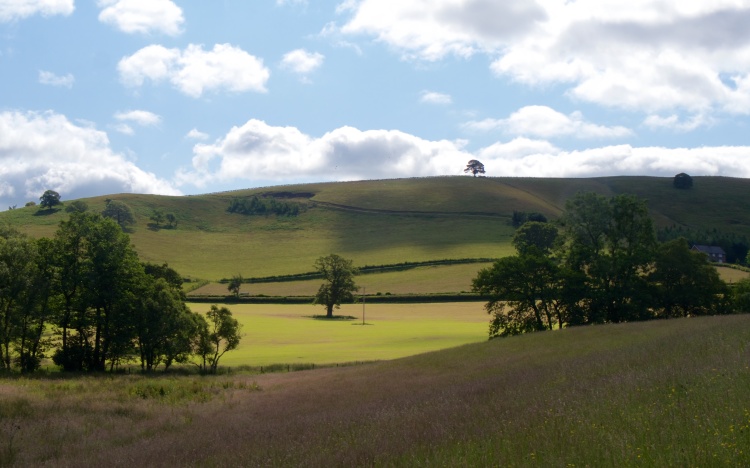 Hayfield between the Long Mynd and the Stiperstones. The uncut field in the foreground held a breeding curlew that lost its eggs to a predator back in April. 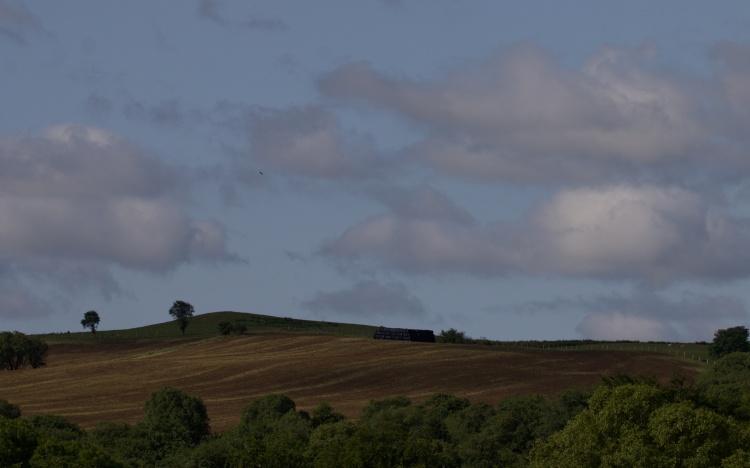 Hayfield after an application of manure; a neat pile of black-wrapped silage is at the top of the field.

We walk into the field full of boisterous cows and follow the beep of the radio tag; we find it and the ring remnants plus a few feathers after a fox or possibly other mammal predator has eaten and left the chewed remains. We check another hayfield where a young curlew was reported a day or so ago. Across the valley we hear the clear, sad, ‘coolee’ of a lone adult; it flies over then whiffles with great energy but never barks its familiar warning; it circles the wide empty valley and is then lost over a hill. This behaviour suggests another failed breeding attempt. 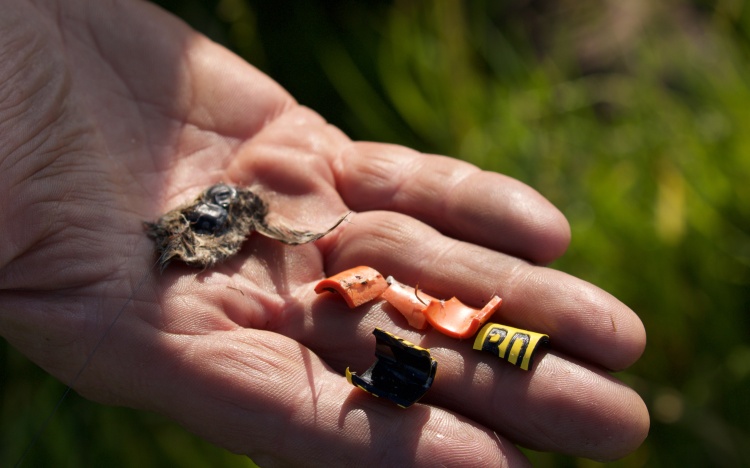 The remains of the fledgling curlew; predation by foxes, badgers and perhaps other species is hitting both eggs and young hard. 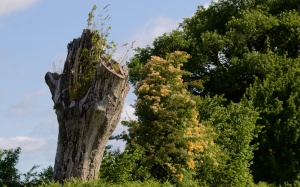 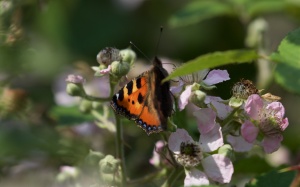 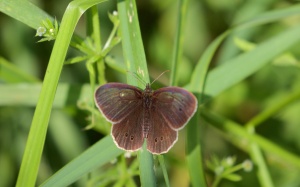 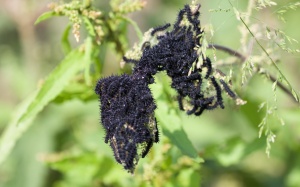 The roadsides hold abundant honeysuckle. Small tortoiseshells and ringlets are having a good year and peacock caterpillars form a black knot in the nettles. 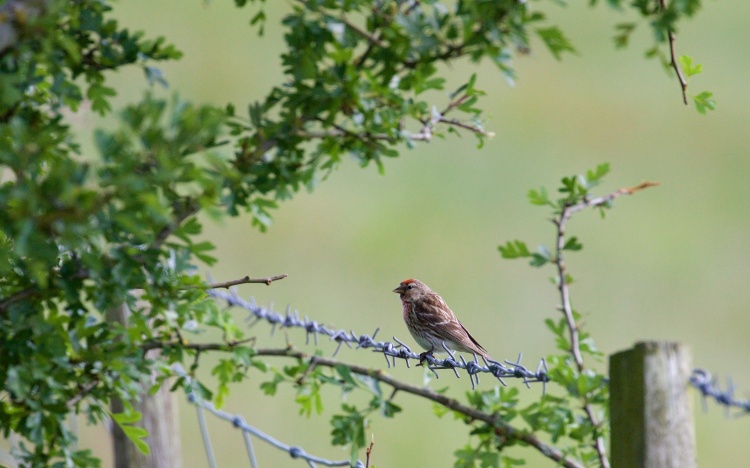 Lesser redpolls are breeding in the area. 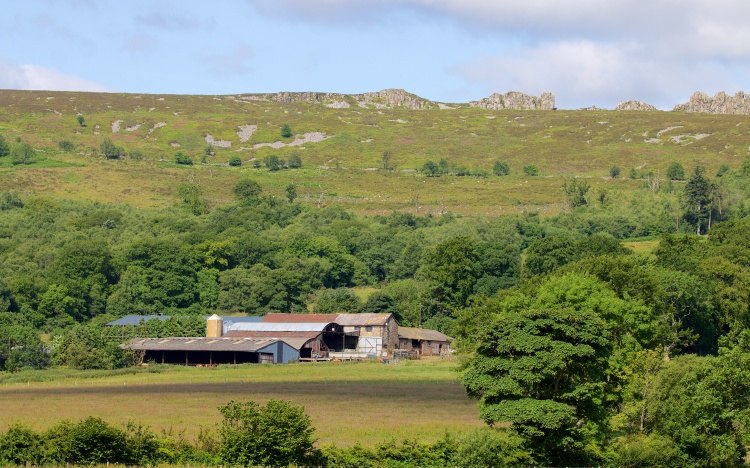 The soft landscape of the Stiperstones.