The firing range and military training ground near Pirbright is the largest patch of heathland remaining in Surrey and under a heavy mist in late May it is not the usual tinderbox of summer. Today, a perimeter fence bars entry except on days when the red flags are not hoisted up the white-painted poles. Nearly forty years ago there was no fence and this was a summer campsite, a place to study birds and to dodge the army land-rovers that patrolled the sandy tracks.

Back then, a huge fire had recently cleared the heather and birches from most of the heath and Dartford warblers were confined to a few remnant patches but today they are everywhere. Now, there are only small, neatly cleared strips of bare ground amongst the swathes of tall heather.  The management of the dry and wet heath habitats enables rare reptiles, invertebrates and birds like Dartford warblers to flourish. But Ash Ranges in the mist is like a beautifully tended, Japanese garden. 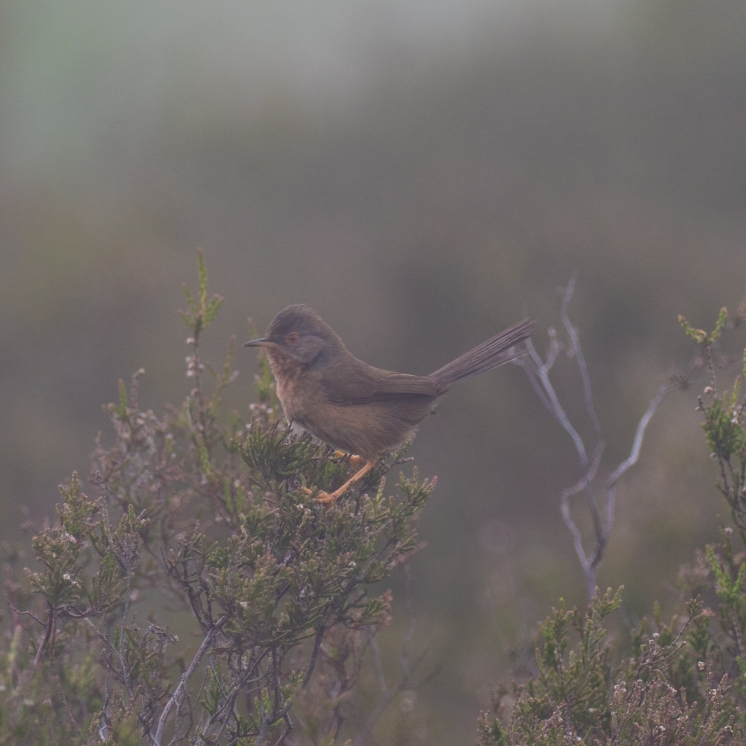 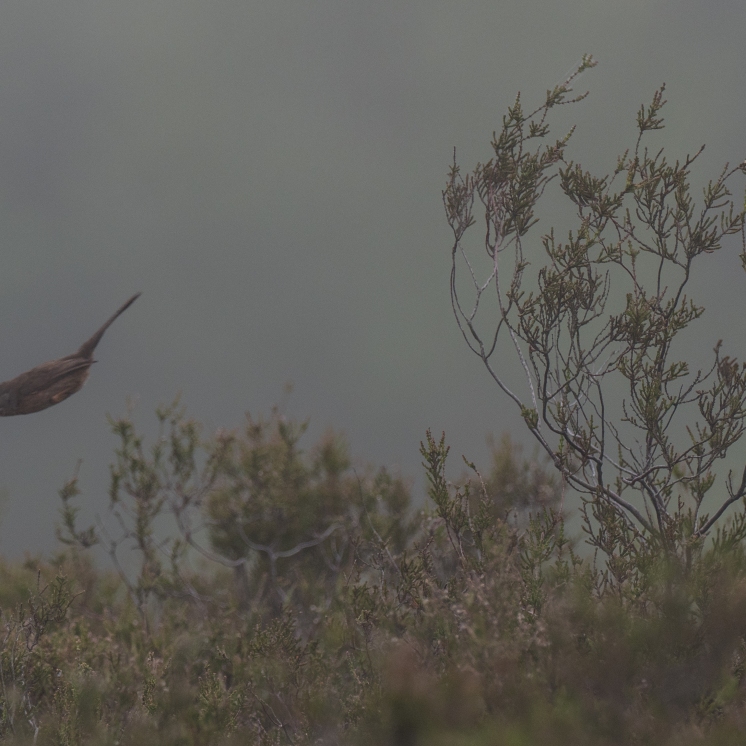 The walk due north from Dolley’s Hill is made easier by the neatly cut firebreaks in the dry heath that contour around Whitepatch Hill but the view east to Longhill Bottom is lost in the mist.  Here, lesser redpolls call and feed avidly in the birches; stonechats chat; and Dartford warblers churr and sit up in the heather.  To the west, on the distant ridge above, there are a few pines just visible on Bastion Hill and after walking along the undulating base of the low hills another more distinct clump at Crown Prince Hill; this little wilderness is ringed by firing ranges that pepper ricocheting bullets on to the heath; in certain hotspots these whistle overhead and smack and crack into the pines.

Large and hairy, emperor moth caterpillars are still walking foolishly across the tracks,  the perfect prey for cuckoos that still retain a hold here.  There are a few singing tree pipits on the taller birches and willow warblers fluting from the scrub but no woodlarks which prefer barer, fire-damaged, ground. There still maybe redstarts on the tall dead pines behind Bastion Hill but probably not a summering wryneck in a distant corner of the heath calling fruitlessly from a woodpecker hole, which was a highlight of 1979.

Close to where a pair of hobbies bred all those years ago and were watched for hours, the distinctive ringing calls are heard as a food-pass carries on but the birds are elusive amongst the dark pines in the dull light. The exceptional field naturalist and professional egg collector, Desmond Nethersole-Thompson, hunted for hobby nests here between 1928 and 1931 and the sites he ringed on a map are still favoured.  This is a landscape that has probably held hobbies for centuries, perhaps because of the availability of safe nest sites and locally abundant dragonfly prey over the mires. 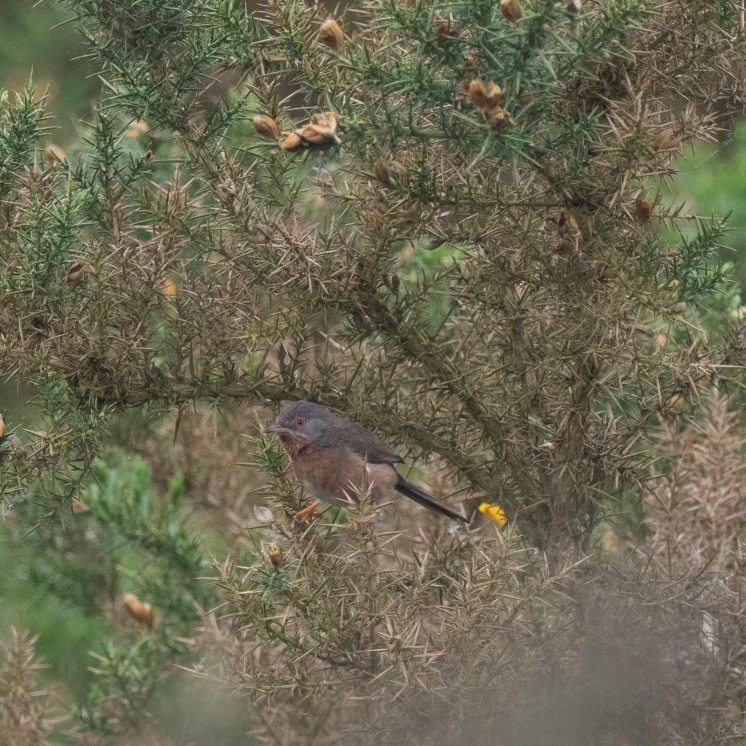 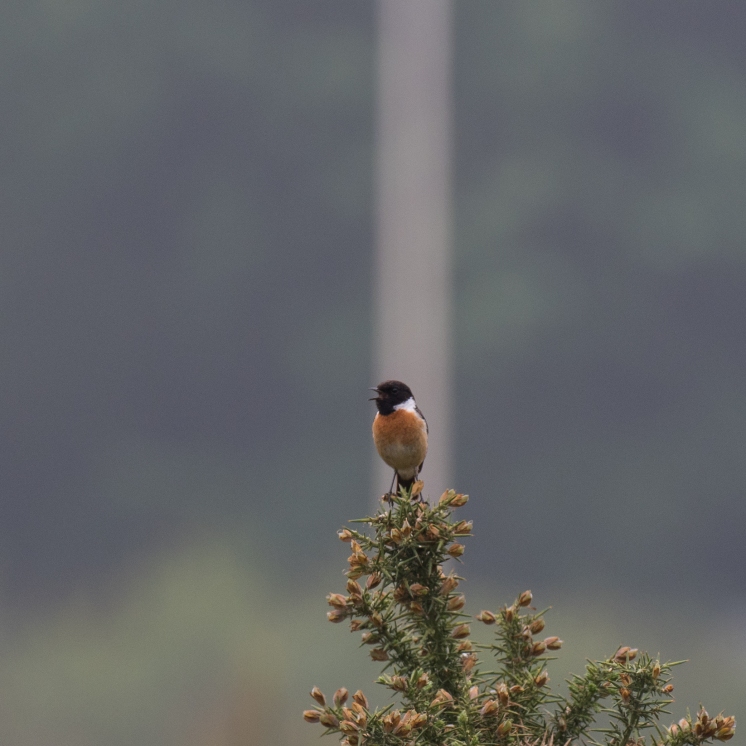 Male stonechat with flagpole behind

Ash Ranges was where my late friend and mentor Frank Blackburn took most of his pioneering and beautifully composed photographs of breeding birds including nightjar, stonechat and of course hobby.  For the last, he built an 80ft pylon hide near a nest in a Scot’s pine with the help of the energetic and fearless, bird sound recordist, Vic Lewis. Like Nethersole-Thompson, Frank was a brilliant field naturalist; he was as adept at finding a woodlark or a tree pipit nest on eggs as he was photographing it with young and perhaps that knowledge behind the camera was why his images are often so intimate and memorable. And he loved Ash Ranges because it was his back garden, his work place and most of all his sanctuary.