One olive grove with crumbling stone terraces just down the hill and not far from Agios Dimitrios has remained especially rich in plants for the past month, whereas many others were a blast of white chamomile Anthemis chia and stock Malcolmia graeca but are now rank grass with splashes of pink cranesbill Geranium brutium and brilliant yellow Isatis tomentella. It is likely that the soil in these is deep and fertile and the flower rich ones have just a thin crust above the limestone bedrock. A tethered cow and yearling bull have been put in the field and are moved daily so they don’t dent the vegetation much and their dung is spread throughout the grove.

In the early morning, once the sun is over the hills, the field is buzzing with myriad types of bees and wasps but also the drone of low flying dung beetles that land with a belly flop on or close to a cow pat and there get to work. There is Scarabaeus sacer and also a dimply one S. variolosus, but there are other less obvious ones too that busily bury into the cow pat leaving puncture marks like bullet holes and others that dig long tunnels underneath all to provide a breeding place and food source for the next generation. The large crowd of iridescent dung flies that sit on a pat always buzz off in unison on passing, which still makes me jump every time.

There is a great dung beetle mapping project in the UK with the inspiring acronym DUMP. Dung beetles in many parts of their truly global range are declining with changes in animal husbandry, especially the use of anti-parasitic drugs such as ivermectins. The Mani is an area where such drugs are unlikely to be used very much which probably explains the presence of so many dung beetles. In only one of the groves has the ground vegetation been sprayed with a herbicide like ‘Roundup’; most are cleared by hand, if at all and a few are rotovated.

The flowers have been spectacular since mid-February but the dominance of swathes of white chamomile Anthemis chia is waning as are the splashes of scarlet Anemone pavonina. But the Ophrys orchids are appearing; small, weirdly shaped and yet beautiful. The first to appear were yellow (O. lutea) mirror (O. speculum) and sawfly (O. tenthredinifera) but now beautiful deep purple O. ferrum equinum is out and others that may be the same or different species. Dark red and rather ominous looking serapias appear everywhere in the turf.

The butterflies are still few with speckled wood, whites, brimstones and clouded yellows on the wing and the commonest blue is the green underside blue. Small heath and brown argus have started to appear as have orange tips as are the two flashy species, swallowtail and southern festoon; the latter is the most spectacular design.

The grey wagtails have left and the number of blackcaps has declined but they are still abundant. Subalpine warblers arrived in mid March and work the low bushes. Hoopoes are also and work the roadsides before being distrubed when they are off with a dazzle of raised crest and broad black and white striped wings. Greenfinches and cirl buntings are singing their repetitive sings from cypress trees and telephone wires. Chaffinches, like blackcaps, were also very common in the olive groves a few weeks ago and many have now moved off, the remaining pairs have not yet started to sing. The house sparrows nest everywhere; at home they are under the clay roof tiles and in the air vent from the oven extractor fan where they bash about noisily. In the late afternoon, goshawks and sparrowhawks display together and are seen as they circle prior to hunting.

2 Replies to “The local olive grove” 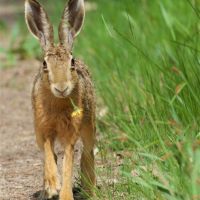