The fine chateau at Villebois-Lavalette sits on a low hill, the medieval fortifications speak of a long and combustible history: an Iron Age fortification; a Roman castrum; an  English stronghold during the Hundred Years War; the seat of Dukes in the age of aristocracy; a prison after the Revolution; and today a battleground for summer tourists. The land hereabouts is full of grand houses, ancient abbeys on the ‘chemin de Compostelle’ such as the Abbaye de Maumont, and quiet towns that come alive on market days.

The large fields that run over the rolling hills are intensively managed for winter wheat, maize and increasing hectares of oil seed rape. Large tractors are out spraying on calm evenings. The water meadows that were flooded only a few months ago lie adjacent meandering, tree-lined rivers and streams; these still support herds of huge Limousin cattle. The sweep of agriculture is broken up by forests, vineyards and villages and so the landscape is rarely monotonous. 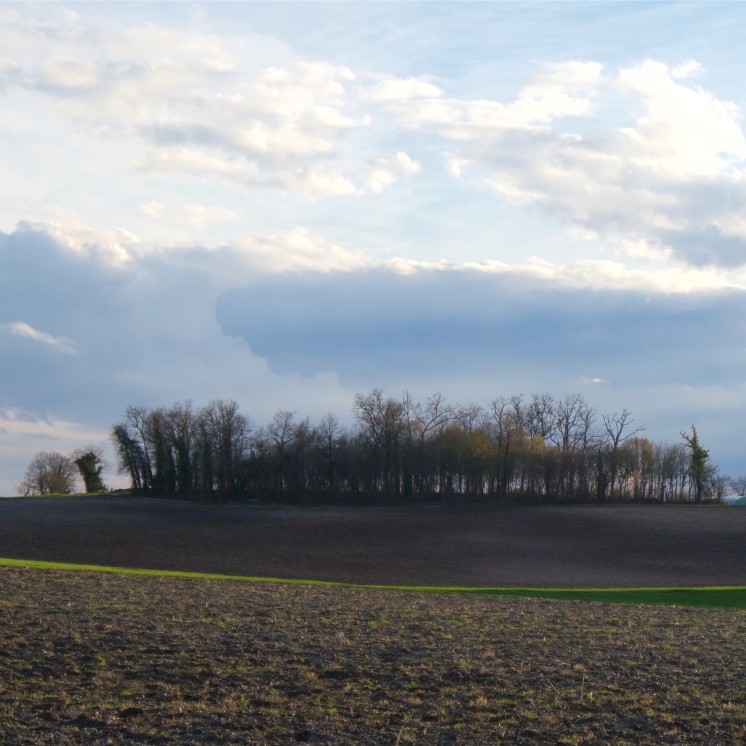 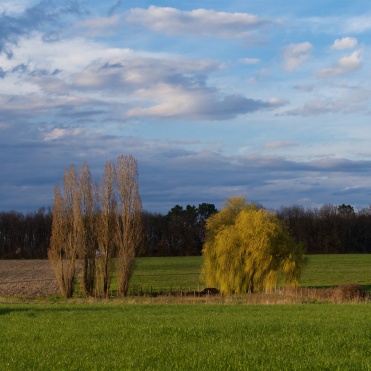 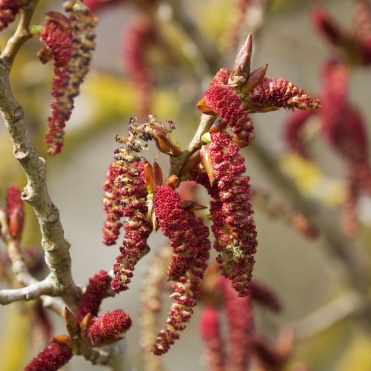 The water meadows are deep grass and drifts of dandelions Taraxacum officinale but many also hold snake’s head fritillary Fritillaria meleagris, in French the more attractively named fritillaire pintade.  Poitou-Charente is a stronghold for these elegant, spring flowers that are only found on untouched water meadows.

Garden plants include early spider orchids Ophrys sphegodes that are protected from the mower by a stockade of hazel Corylus avellana sticks. 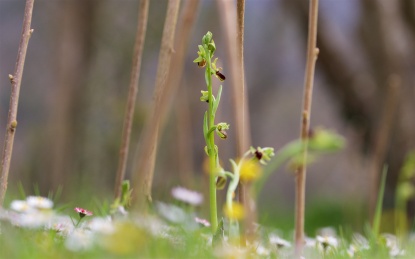 The orange tips Anthocharis cardamines patrol the woodland rides on a sunny morning where shepherd’s smock Cardamine pratensis lines the tracks.  This widespread plant of damp meadows and woods provides adults with nectar and along with other crucifers such as garlic mustard Alliaria petiolata, a food plant for their caterpillars.

Large bee-fly Bombylius major is also common but much less obvious, it catches the eye as it moves from flower to flower and then settles on a dead leaf. This is a parasitoid; the larvae feed on the larvae or stored food of solitary bees and wasps. Adults approach a nest hole and because of their mimicry are untouched by their prospective hosts, they then kick their freshly laid eggs into or close to the entrance hole, the eggs then hatch and the larvae wiggle in and eat away. 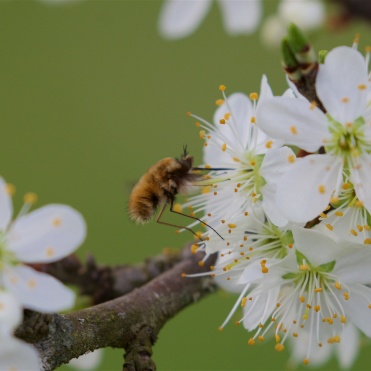 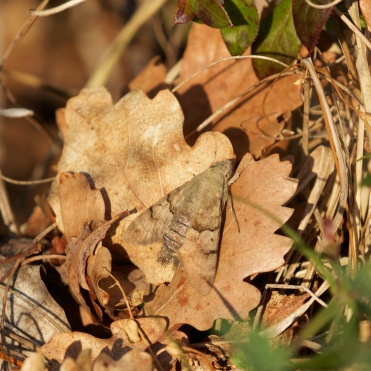 The birds around the house are familiar, all attracted to the various feeders and fat balls; this also brings species out from the nearby woods. Hawfinches Coccothraustes coccothraustes in winter and now a female great spotted woodpecker Dendrocopos major; perhaps one day a lesser-spotted woodpecker Dendrocopos minor, since their faint calls carry briefly across the valley. Swallows Hirundo rustica arrive chattering and sweep the fields and blackcaps Sylvia atricapilla hunch in the cold sun.

One evening a male hen harrier  Circus cyaneus ‘skydances’ across the fields, advertising his presence with a vertical climb, barrel roll and vertical descent; the routine is much repeated, sometimes with a chattering call, as he traverses the empty farmland. On another evening, we watch the same display from the front door. Hen harriers are a relatively common breeding species in this lowland agricultural landscape; we speculate that they may breed in the nearby conifer plantations over towards the commune of Bors.

Wren prospecting for a nest site 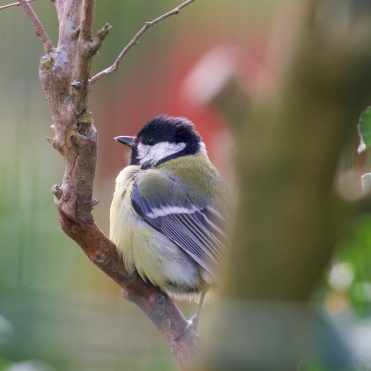 The local pair of black kites Milvus migrans that nest in the adjacent woodland often drift over; once one drops in to snatch something from the lawn with great agility. A pair of short-toed eagles Circaetus gallicus glide over, then one flaps in a sort of display. A grey heron Ardea cinerea flies glides down the valley in the late evening to hunt the water meadows. 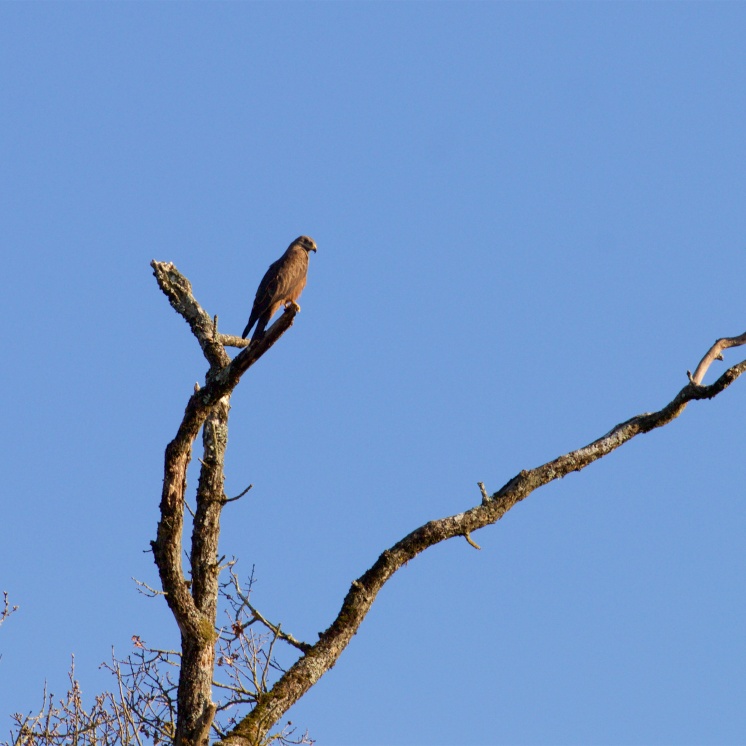 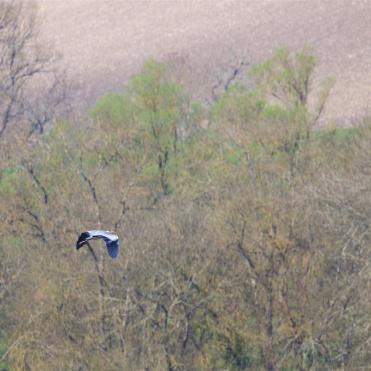 One thought on “South Charente Spring”